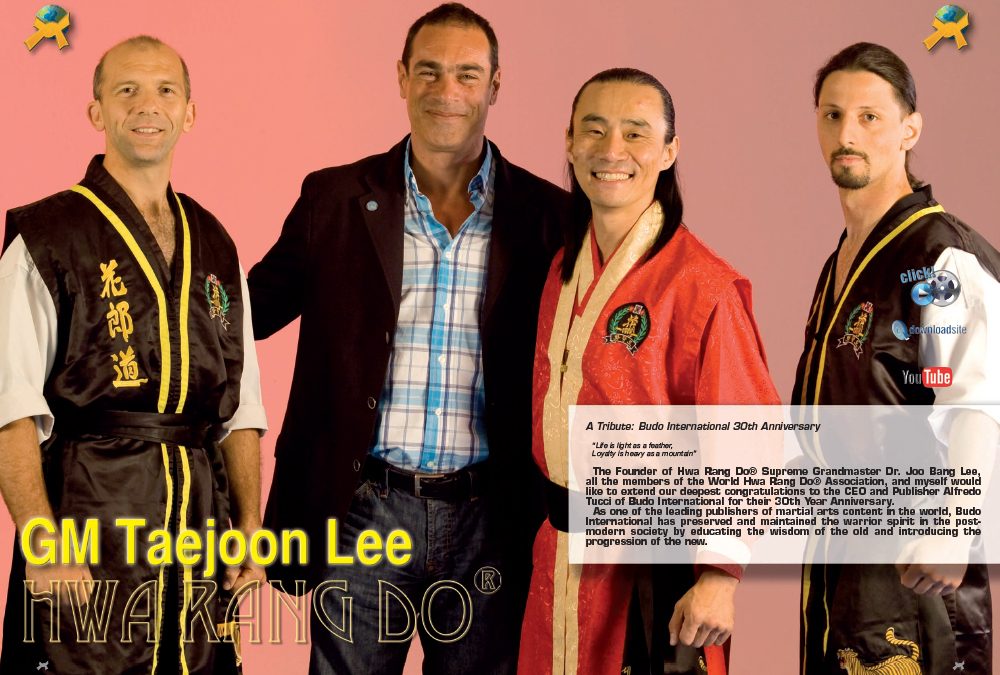 “Life is light as a feather, Loyalty is heavy as a mountain”

The Founder of Hwa Rang Do® Supreme Grandmaster Dr. Joo Bang Lee, all the members of the World Hwa Rang Do® Association, and myself would like to extend our deepest congratulations to the CEO and Publisher Alfredo Tucci of Budo International for their 30th Year Anniversary.

As one of the leading publishers of martial arts content in the world, Budo International has preserved and maintained the warrior spirit in the post-modern society by educating the wisdom of the old and introducing the progression of the new. It has successfully integrated the power and beauty, the philosophic and spiritual, the technical and conceptual, the physicality and grace of the dynamic and eclectic nature of martial arts to an international audience in an exciting, entertaining visual format keeping it relevant in our fast ever-changing environment.

This was only possible due to the dedication, perseverance, and passion of one man, who is himself a master of the martial arts, Alfredo Tucci. I can best tell you of this man by sharing with you a short story of my first encounter with him. 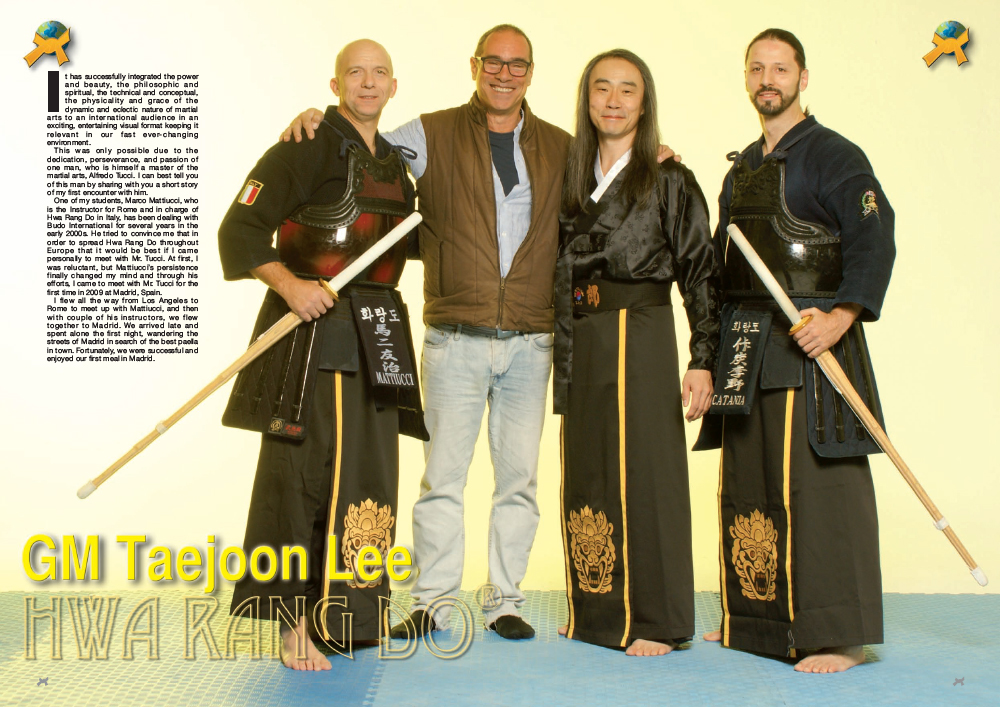 One of my students, Marco Mattiucci, who is the Instructor for Rome and in charge of Hwa Rang Do in Italy, has been dealing with Budo International for several years in the early 2000s. He tried to convince me that in order to spread Hwa Rang Do throughout Europe that it would be best if I came personally to meet with Mr. Tucci. At first, I was reluctant, but Mattiucci’s persistence finally changed my mind and through his efforts, I came to meet with Mr. Tucci for the first time in 2009 at Madrid, Spain.

I flew all the way from Los Angeles to Rome to meet up with Mattiucci, and then with couple of his instructors, we flew together to Madrid. We arrived late and spent alone the first night, wandering the streets of Madrid in search of the best paella in town. Fortunately, we were successful and enjoyed our first meal in Madrid.

Early next morning a female driver came to pick us up by car and we were escorted like precious cargo to a closed gated community. When we first arrived, we were a bit puzzled, as it seemed like a residence community with no commercial buildings in sight. That already showed me that this man was committed to his work, trying to create the most comfortable atmosphere to dedicate his time. We entered what seemed like a beautiful mansion, greeted by a room full of workers, and then proceeded down a staircase into Mr. Tucci’s office where we waited for his entry. After several minutes have passed, Mr. Tucci entered with a warm yet professional greeting. 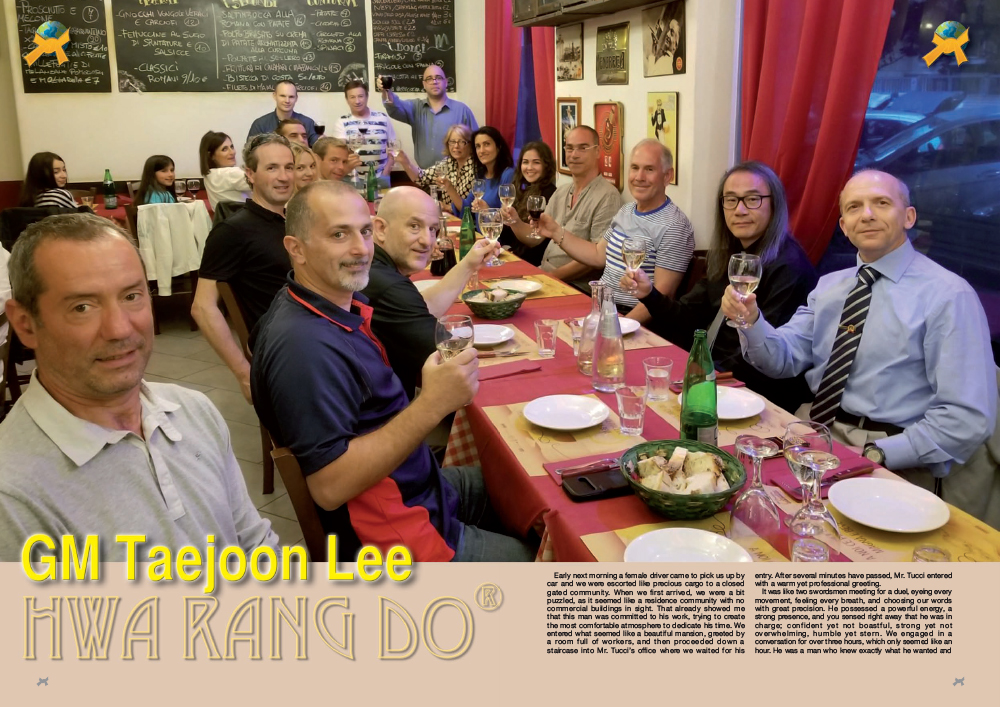 It was like two swordsmen meeting for a duel, eyeing every movement, feeling every breath, and choosing our words with great precision. He possessed a powerful energy, a strong presence, and you sensed right away that he was in charge; confident yet not boastful, strong yet not overwhelming, humble yet stern. We engaged in a conversation for over three hours, which only seemed like an hour. He was a man who knew exactly what he wanted and was not afraid to express it. However, he was flexible and readily accepted new ideas and suggestions. He possessed all the traits that I, being the next Heir to Hwa Rang Do, admired and aspired to. We slowly began to let our guards down after several rounds of verbal exchange, showing mutual respect for each other’s knowledge, understanding and perception.

After an exhausting conversation, establishing base, and getting familiar, Mr. Tucci suggested for a tour and then to a photo-shoot. It was past lunchtime and when he suggested our next activity, I looked at Mattiucci with a look that said, “I guess we’re not having lunch?” Mattiucci, having understood, responded with a look in agreement. Although I was hungry only having had a cup of coffee for breakfast, expecting a larger lunch, I was not about to suggest that we eat first and instead I said to myself, “No problem, if you’re willing to work first? That’s fine, I can do it without fail.” 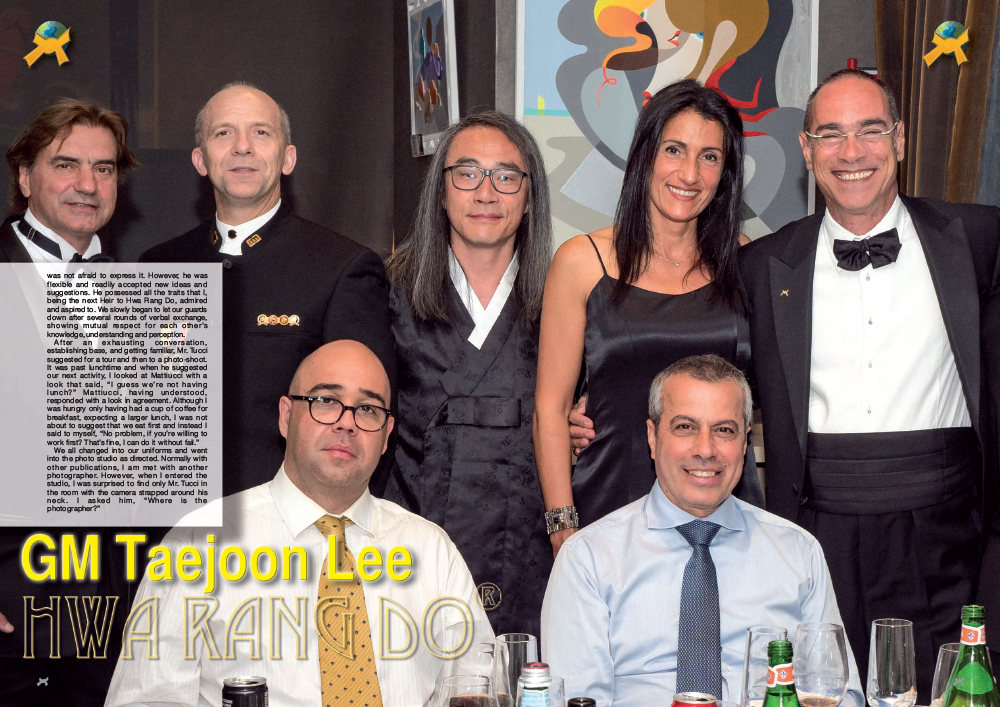 We all changed into our uniforms and went into the photo studio as directed. Normally with other publications, I am met with another photographer. However, when I entered the studio, I was surprised to find only Mr. Tucci in the room with the camera strapped around his neck. I asked him, “Where is the photographer?”

He replied, “I take the photos myself.”

I know from past experience, working with many photographers, that taking martial arts action photos are one of the most difficult and challenging things as a photographer, requiring precision timing and understanding of proper angles, not to mention lighting and focus. So, I was thinking to myself that this is going to be a very long and painful photo-shoot, all on an empty stomach. I was braced for the worst.

I stepped onto the staged area and started to throw a few kicks. I didn’t even know that Mr. Tucci was snapping away until a flash went off. He asked me to take a look. I walk over and looked in the monitor not expecting much. Then, behold it was a perfect shot! I was amazed.

He only took one picture and I knew that this man knew what he was doing and truly pictures do tell a thousand words. He later explained that he’s used other photographers and was never satisfied, thus he took it on himself. In the years to come I will also know his artistry as a painter, sculptor. He is truly multi-faceted. 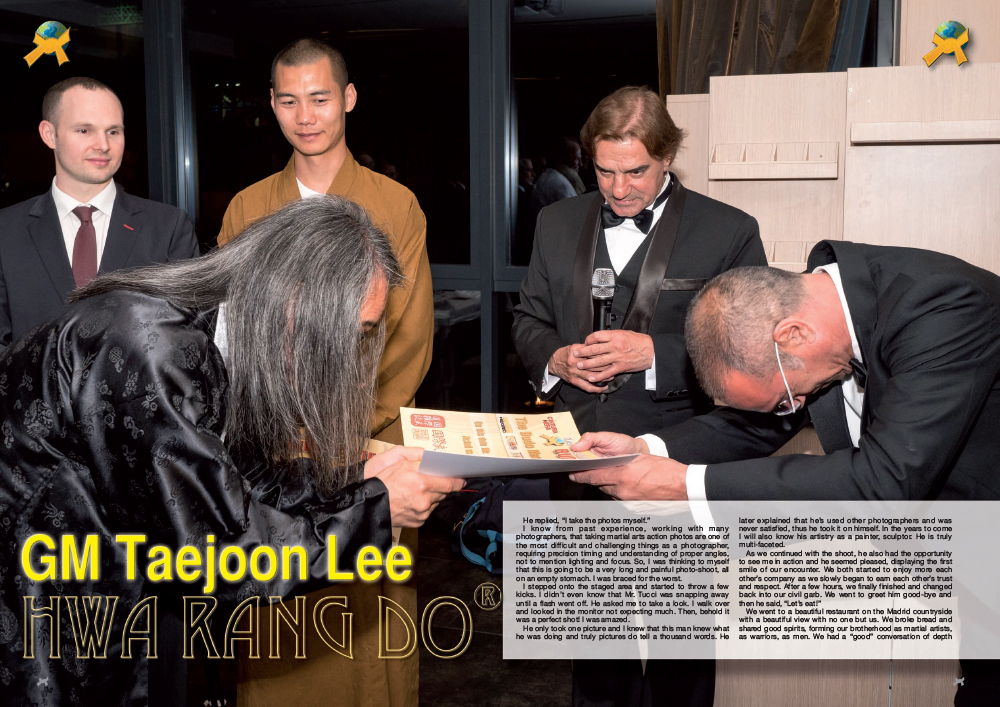 As we continued with the shoot, he also had the opportunity to see me in action and he seemed pleased, displaying the first smile of our encounter. We both started to enjoy more each other’s company as we slowly began to earn each other’s trust and respect. After a few hours, we finally finished and changed back into our civil garb. We went to greet him good-bye and then he said, “Let’s eat!”

We went to a beautiful restaurant on the Madrid countryside with a beautiful view with no one but us. We broke bread and shared good spirits, forming our brotherhood as martial artists, as warriors, as men. We had a “good” conversation of depth and meaning, which I find is becoming more rare each day. When we left, he walked us outside and gave me a big embrace, even crushing the sunglasses in my suit pocket with one word, “Brother!” It’s not everyday that you make another brother. It was a great day! Since then, we have stayed in touch and ever since my move to Luxembourg; I have visited him each year. This year also celebrates our ten-year friendship.

I have met him as a warrior to another warrior and now I have gained a loyal brother. Alfredo Tucci is truly a modern “Warrior” in the most traditional sense – “A Warrior Scholar Poet”: A man of integrity and honor, of humility and loyalty, of strength and courage, a pursuer of wisdom, beauty, and spiritual harmony.

I am blessed to call him my brother, my friend. And, I am certain that Budo with the leadership of Alfredo Tucci will continue to be a beacon of hope and truth to all martial artists in the World. May God bless you and Budo International with many more years of health, prosperity, and peace. 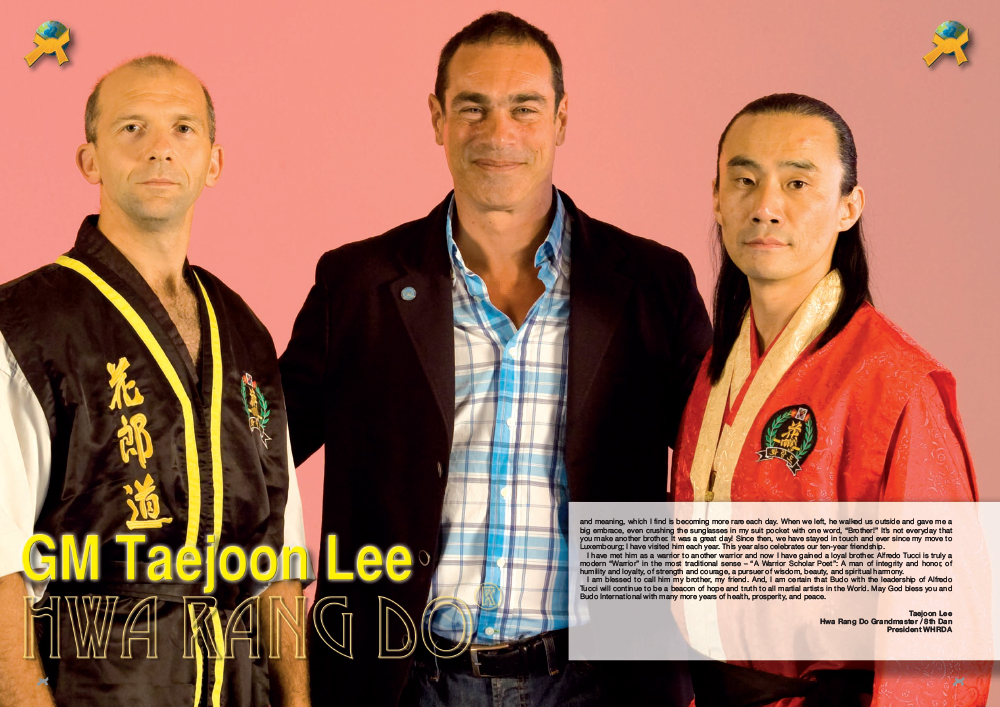