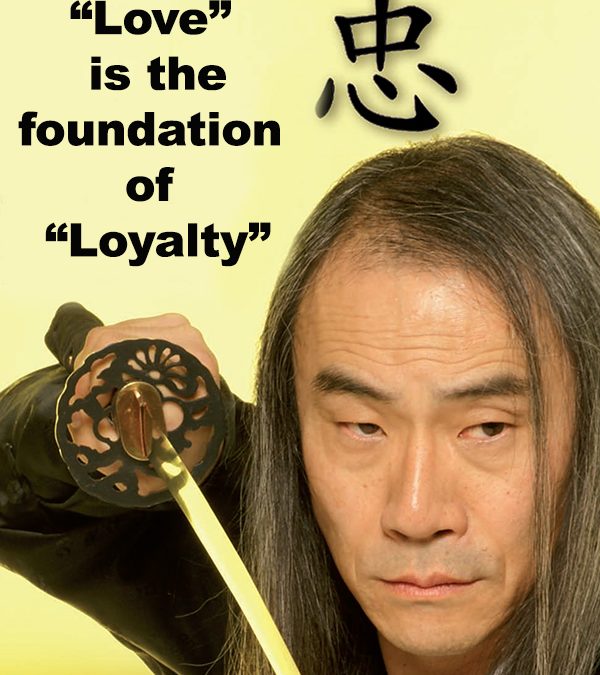 In order to derive meaning, we must always look deeper into the foundation and its origin, which in the process offers truths about the nature of man and our morals.

The definition of “loyalty” provided by Dictionary.com is the act of being “faithful to one’s sovereign, government, state, oath, commitments, obligations, leader, party, cause, or to any person or thing conceived as deserving fidelity.”

Then to understand loyalty we must define “faith”, which it states as “confidence or trust in a person or thing; belief that is not based on proof; finally, belief in God or in the doctrines or teachings of religion.”

The Chinese character for Loyalty, which is used throughout the Far East (mainly China, Korea, and Japan) consists of the word “center”       and “heart”         .

This seems to offer the essence of the truth of what loyalty is. What lies at the center of your heart? What do you live for? 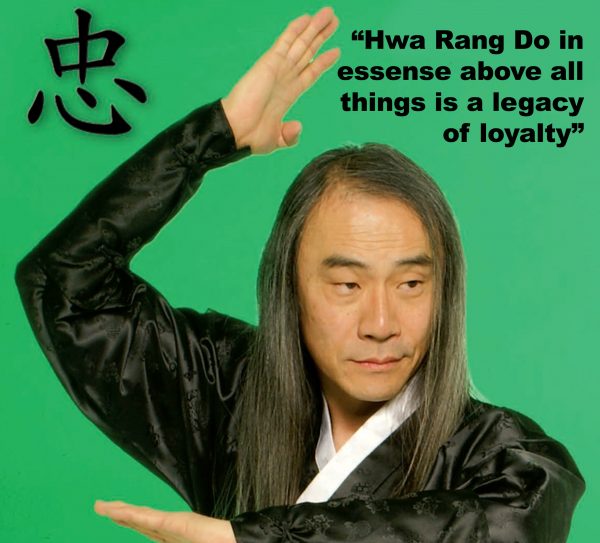 In ancient times, actually not even that far back, less than a century ago, we used to live for something greater than ourselves, namely God. In the world beyond postmodernism and into the information age, we now live for ourselves, for personal happiness. We are now referred to as an enlightened and disenchanted generation as supposedly science has destroyed God and made each person a god, replacing God with the “self” at the center of the heart.

Hwa Rang Do in essence above all things is a legacy of loyalty. What lies at the center of a Hwarang’s heart is King, then family, then friends, and in that order. Of course, it is God that holds it all together as King is ordained by God, by Heaven. Without God there is no King and without a King there is no kingdom; and without a Kingdom there is neither family nor friends. Much like the Greeks which had four categories of love: First, Agape – Love of God; second, Storge – Love of family; third, Philia – Love of Friends; and last Eros – romantic Love. Therefore, what lies at the foundation of the heart is faith, a belief in God, which gives order and meaning to all things.

Interestingly, the Greek categories of love are much like the Hwarang O Kae (The Hwarang Code). However, in the Hwarang Code there’s no mention of Eros. The fourth Hwarang code is never to retreat in battle.

Wonsul, as a Hwarang could not have returned defeated. Not only did he have to abide by the Hwarang code, but also he had to bring honor to his father and family’s name, as General Yushin Kim was the Supreme Commander of all the Silla Army, of all the Hwarangs. Wonsul had to be exceptional not only because he was a Hwarang, but as the Supreme Commander’s son and must set the example for all the other Hwarangs or he would bring disgrace to his King, but most of all to his father.

Fully aware of his expectations, when Wonsul realized that victory was unattainable, he rushed to die in battle. Yet, his Executive Officer, Tamnung, prevented Wonsul from dying. And, why did Tamnung stop Wonsul? That was his duty and responsibility. He was loyal to Wonsul, but also to the wellbeing and flourishing of the Kingdom, which led him to protect Wonsul at all costs. Rather than dying in an unwinnable battle, which would have been a waste of a great warrior, Tamnung chose to protect and save Wonsul and the Generals so that they may fight another day, protecting the Kingdom. Tamnung chose the optimistic mercy of the King rather than the finality of death. 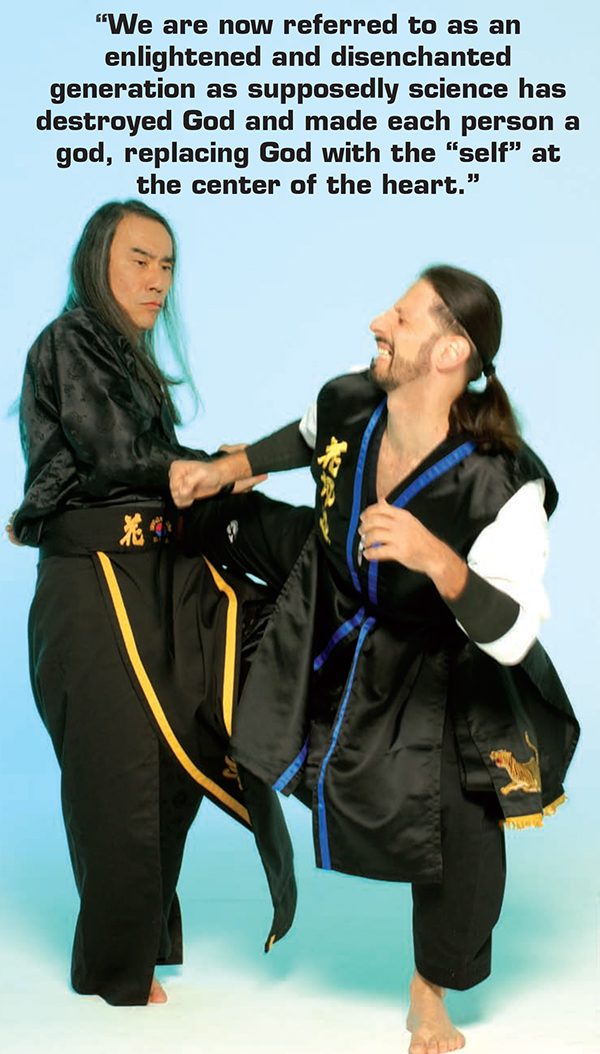 Then, as the Tang army was gaining on them, which would have been a certain death for all of them, the Chief Inspector Taegam sacrificed his life and if that was not enough his son charged after him and died as well. However, their deaths were not in vain, as it gave Wonsul and the Generals precious time needed to escape, to avoid eminent death. All this was witnessed by Wonsul and most definitely he would have had to have been restrained once again from charging into his own death.

One has to ask the question, why were they so eager to die, so eager to sacrifice their lives? This answer lies deeply rooted in the idea of what Love is. It is out of love for their King, their family, and their friends that they are willing to die so that others may live. When one makes this decision, to give up their life for another, it’s never an easy choice. The individual dying is one matter, but what of the people who live on, the mothers, the wives, and the friends. Hence, suicidal death is selfish and does not take into account for the feelings and wellbeing of others and cannot be considered noble, as one dies to wipe away their own pain and misery, burdening their loved ones with greater sorrows and unresolved regrets. When it is a selfless death, dying in order to protect and save others, the one’s whom you’ve died for will all suffer the loss, but they will embrace the pain and become motivated to better themselves in order to honor your sacrifice so that your death would not be in vain.

Sacrifice is the action of loyalty; it is the ultimate display of one’s love to what they are loyal to, as love requires selflessness and if one loves because of self-gain, that cannot be considered true love, only love of the self. Therefore, self-sacrifice is essential to love, but today most people’s idea of love is self-centered in nature; they love the things or people, which pleases them and when it or they no longer satisfy their wants and needs, then they are discarded and replaced. For correction, one cannot love a thing, as love is only applicable to relationships. That further shows how we have trivialized the true meaning of Love in the modern culture. Today, the popular notion is “self-love”, to love the self and hence you are loyal to yourself, making the self the center of one’s heart. Therefore, one might say that the ultimate act of self-love is to sacrifice one’s life, what is of the most value, to oneself. Hence, making suicide the ultimate act of self-love. This type of thinking leads to complete absurdity, but one which is very logical without something greater than the self. Of course, a reasonable self-centered naturalistic individual would never accept the idea of self-sacrifice as it contradicts their maxim of self-preservation.

However, even when one sacrifices out of love with intent to bring a greater good, furtherance of life, and happiness to others, there is still always residual pain. Pain and suffering is unavoidable and all endeavors, pursuits, and paths attempting to rid or avoid it are futile. Happiness is not from the absence of suffering; it’s exactly the contrary, it is because there is suffering that we understand happiness: Happiness is the byproduct, a result of living a life in righteousness. Of course, one has to define what “righteousness” is and it is not to be confused with “self-righteousness.” Thus, pain and suffering is that much more enhanced, that much more real, that much more unbearable when love is greater. In fact, “Love” is the foundation of “Loyalty,” that which lies at the center of one’s heart and the ultimate show of our love is the sacrifice of our own life for the betterment of others, fulfilling our primal loyalty to God.

Now, Wonsul arrives home ashamed with a small band of soldiers, beaten, tattered, and lifeless, as though walking dead. No welcoming parade, no one to greet them, as though entering into a ghost town, silent, quiet, into a living hell in a march of shame, the worst a warrior can ever dream of facing. Imagine the pain of the mother unable to see her own son after he had returned from battle. How elated she must have been to know that her son has returned alive, yet in such great anguish, as she could not see him, attempting to uphold the values of a warrior culture of being the proper, dutiful wife to the General. She had to fight her tears back to not show weakness, as that would shame her husband. What mother would not want to rush out and hug their own son who was created out of her own body, that she had to carry for nine months and felt every heartbeat, every movement, every twitch, and ultimately suffering horrendous labor pains to give birth to a life, to a new soul. 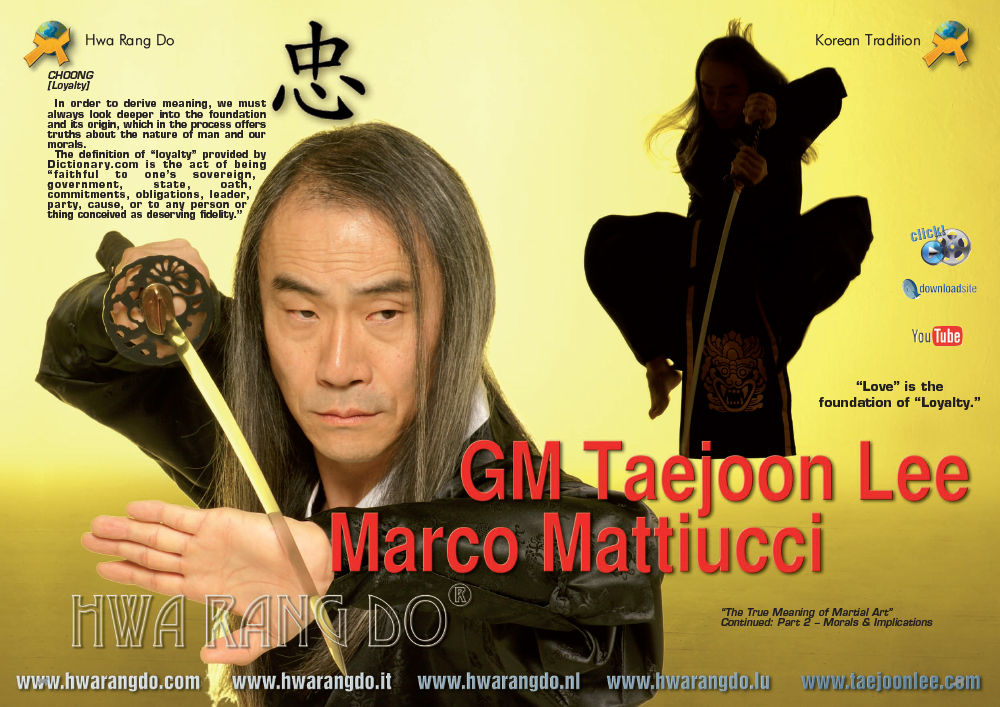 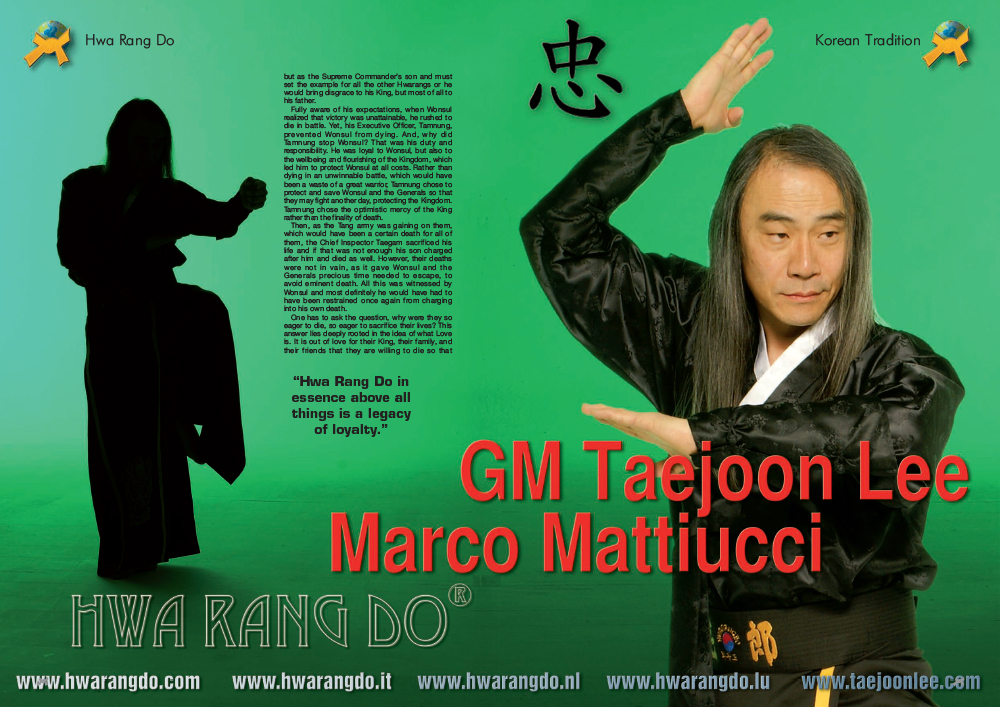 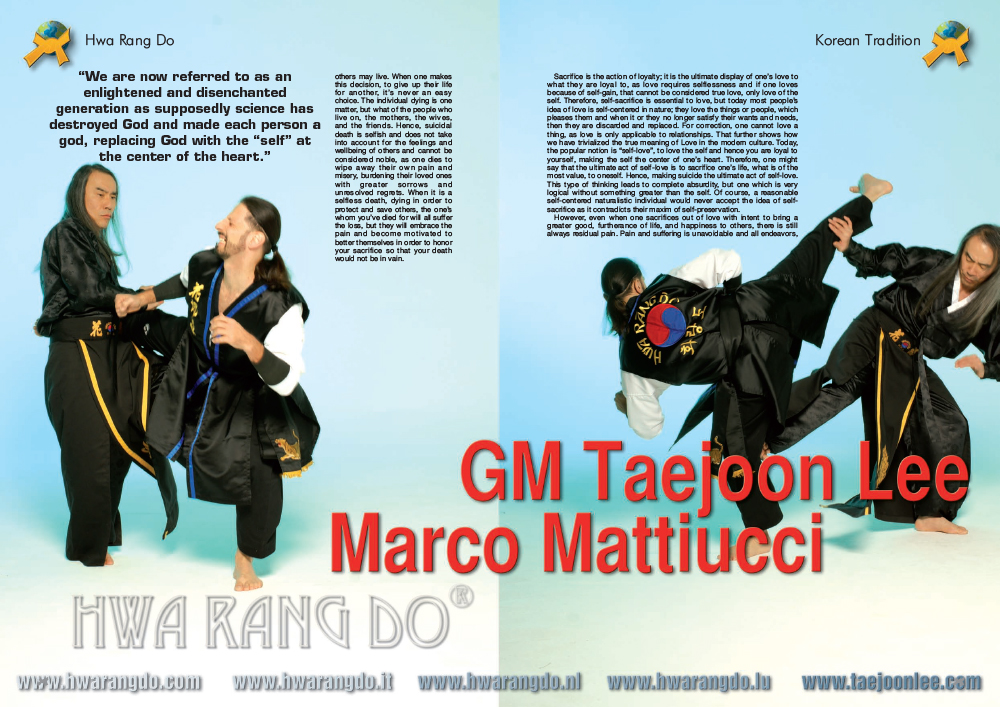 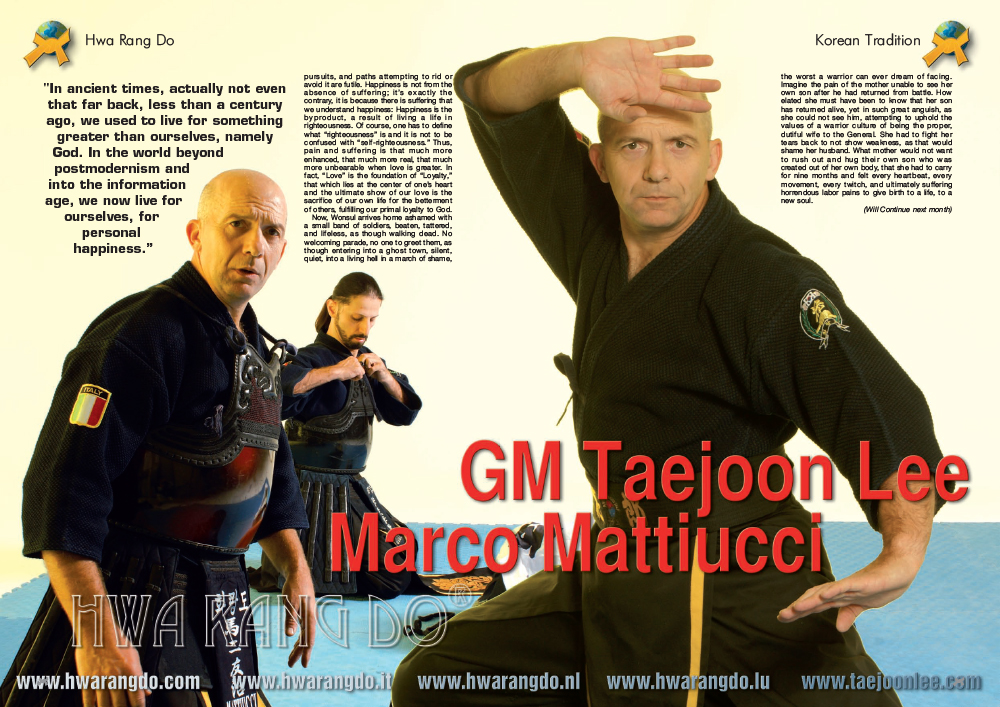