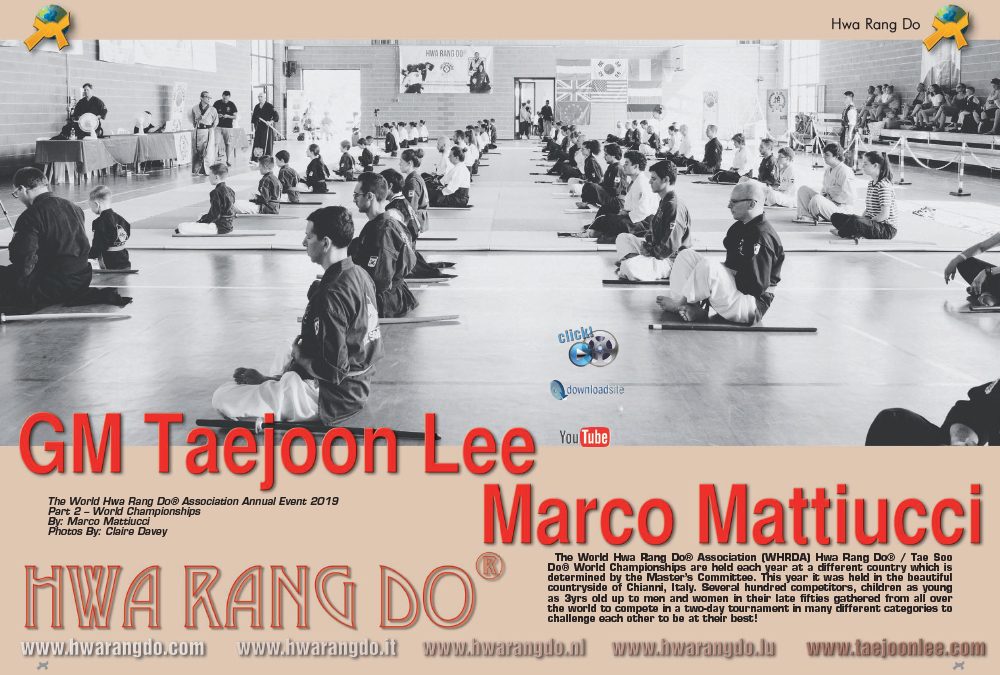 The World Hwa Rang Do® Association (WHRDA) Hwa Rang Do® / Tae Soo Do® World Championships are held each year at a different country which is determined by the Master’s Committee. This year it was held in the beautiful countryside of Chianni, Italy. Several hundred competitors, children as young as 3yrs old up to men and women in their late fifties gathered from all over the world to compete in a two-day tournament in many different categories to challenge each other to be at their best!

Hwa Rang Do, being a complete comprehensive martial art, the tournament is truly a decathlon of martial arts where one competitor must demonstrate proficiency in a wide range of martial arts skill. The categories include:

Then there is the Team Competition. The Team Competition consists of Yongtoogi – Stand Up Quick Submit Fighting; Gotoogi – Submission Grappling; and Mugi Daeryun – Weapon Fighting. In order to win the Team Championship, the Team must win two out of three categories. It is truly a test of one’s skill, comprehensive knowledge, and endurance.

All the participants did a fantastic job; especially the Italians having the hometown advantage went away with the most medals earned with Luxembourg in second place and USA in third.

Our view of competition is to be at our best so that we can push each other to become better. It is not for self-aggrandizement and self-glorification, but for the betterment of the art and the group as a whole. This year, the most advancement from all the categories of competition was in the weapon fighting. We have been working hard to promote our unique version of sword and stick fighting for the past 20 years. The ability to strike to the legs as well as the application of spinning attacks makes it very different than your traditional kumdo/kendo. It is starting to take a style and flare of its own as Grandmaster Taejoon Lee had envisioned, incorporating the Um/Yang concept within Hwa Rang Do of both circular and linear movements. With also the new uniform of Gumpo, which replaces the Japanese Hakama, Hwa Rang Do’s weapon fighting has become its own unique art.

In the Black Sash Gumtoogi and Bongtoogi Divisions is where you noticed the most improvements. The timing, the precision, and the speed as well as the combination and spirit of the attacks improved greatly, making it also esthetically pleasing and exciting to watch. It is a surprising improvement if you take into consideration that weapon fighting is only trained once per week with the swords and sticks alternating every other week. Our training week is divided into three parts of our dynamic application along with the extensive core curriculum which translates into three days of training: first day on standup striking sparring and open hand forms with core techniques; second day on submission grappling and weapon forms with core techniques; and the third day on weapon fighting. You can get a glimpse of Gumtoogi (Hwa Rang Do Sword Fighting) through the current instructional video by Grandmaster Taejoon Lee, produced by Budo International. We look forward to sharing our unique weapon fighting system with the world through further videos with Budo International with more in-depth advanced applications of Gumtoogi as well as an introduction to Bongtoogi (Hwa Rang Do Stick Fighting).

However, the most surprising result from the championships was the Luxembourg National Team winning the overall Team Competition. This was unprecedented as it is the first time that USA has lost to a foreign nation since the Championships began over 25 years ago. This has been only the third year that the Luxembourg Team has participated in the Team Competitions with the Luxembourg Hwa Rang Do Club being only 5 years old and the last three under the leadership and instruction by Grandmaster Taejoon Lee.

How the Luxembourg Team won could have been a movie, truly dramatic and miraculous. It came down to three countries, Italy, USA and Luxembourg. Being the defending Champions, USA had a choice of going through the eliminations for each category of Sparring, Grappling, and Weapon Fighting or to just defend the title by competing against the winning team between Italy and Luxembourg and they decided to defend their title without going through the elimination rounds. For the Team Sparring Competition Italy won, then competed against USA with USA winning the Team Sparring. For the Team Grappling Competition, Italy wins again and competes against USA with Italy being victorious. Finally, it was up to the Team Weapon Fighting. If either of Italy or USA wins the Weapon Fighting, then one of them would have been declared the Team Champions. However, that was not to be. Luxembourg defeated Italy and then USA to win the Team Weapon Fighting.

This created a three-way tie with each country winning one category. To break the tie, individual wins of each of the National Teams were tallied. Since the USA Team decided not to go through the eliminations, they had the least amount of individual wins, which meant they were out of the Team Competition, leaving only Italy and Luxembourg for the Team Championship. When the total wins were added up, surprisingly both Italy and Luxembourg had the same number of wins, resulting in another draw. This lead to one match of Gumtoogi – Hwa Rang Do Sword Fighting by their best fighter from each team to determine the Team Champion for 2019. Christian Parisi was selected for the Italian Team and Giuseppe Morelli for the Luxembourgish Team. It was almost like an ancient duel, two men fighting for the honor of their king and kingdom. For both swordsman, the burden was heavy and they both felt the pressure. The match started as they faced each other, moving slowly, methodically, calculating each step, each movement as silence befell on the room. It was a fierce fight by two worthy adversaries who have faced each other countless times throughout the tournament as well as many years in the past. Ultimately, the victory went to Giuseppe Morelli, winning the Team Competition, who also won the honor bestowed to him by both his master, Grandmaster Taejoon Lee, and country, Luxembourg. It was a befitting end to Giuseppe as he was venturing into the next phase of his life, leaving his cush corporate job to move to Nairobi, Kenya to work as a Project Manager for an NGO, educating and promoting human rights in the slums of Korogocho for the betterment of the world, for Hwa Rang Do, but most importantly for God.

After the successful completion of the Championships, all the Hwa Rang Do Black Sashes, the Instructors, and Masters met with Grandmaster Taejoon Lee (Kuksanim) to review and discuss on how we can improve for the future. Kuksanim reminded us the importance of practicing our forms, our basics, “Much improvement in many areas this year, however, the Hyungs (forms) were sub-standard. The forms are the foundation of Hwa Rang Do and Tae Soo Do. It is from that we transform a normal person into a Hwarangdoist. It is our look and feel, our style, and our legacy. And to do our forms right, it is tremendously difficult. There may be many reasons why their forms are poor, however, this is the root of them all. It is focusing on quantity over quality. Many of you have been teaching for a long time and now beginning to enjoy some of the fruits of your labor and the benefits of having more students. This is the problem of man throughout history, from the beginning of time, greed. The more you have, the more you want. In the beginning you understood the value of your Hwa Rang Do training, what benefits it bestowed onto you, and cared to be the best that you can be. Thus, you were excited to share that with others and that was what motivated you to teach. After many years of life, responsibilities, and don’t forget, bills wearing you down, you submit to the will of society and become enslaved by material things, forgetting what is of true value and replacing them with superficial ones.”

He continued, “You are now dependent on the students for your livelihood and afraid to lose them. You are now afraid to upset them and do all that you can to encourage, to making them happy so they do not quit. You start to overlook a mistake here, a mistake there, starting to be less critical and promoting them in rank with lower expectations. And, I see this more clearly in the children. Hwa Rang Do is not easy, it was never meant to be easy! And, teaching children is not easy, it was never meant to be easy. As a matter of fact, nothing of value is ever easy. It is never a choice for us to dumb-down what we’re teaching them, but to become better teachers, more efficient, more enthusiastic, better problem solvers, and finding better ways to communicate so that we can elevate our students. Each person learns differently and are motivated by different things, and as teachers it is our job to better understand our students, their needs and their wants. Hence, better understanding the human condition, becoming more self-aware in the nature of our existence, and bettering the world through our students. It is our job to make our students better than ourselves as that is the only assurance that our future will be better. Never, ever compromise on quality and remember you are teachers and your goal is not to please your students, but to make them better. And often times “NO” is a better teacher than “YES”. They might not appreciate your lessons and you will not receive gratitude for them, but when they grow older many years from now with more life experiences, one day they will value your lessons. And, you might be fortunate enough to see a child grown to adulthood who you reconnect on social media and they send you a text saying that you have made them a better person, that you were the best teacher they ever had. In that moment, you receive validation of your efforts, it reaffirms your purpose, and a warm feeling swells up in your heart and it is for that moment that we struggle today. This is our true value and no amount of money can buy it.”

Once again, before we could come up with excuses and justifications with our minds racing on why some of our students did poorly in their forms, Kuksanim went straight to the core, the foundation of the problem and shook us into shape, reminding us of our true purpose, which can only be achieved by doing what is right, a path laden with hardships and struggles.

“Following the path of least resistance is what makes people and rivers crooked.” 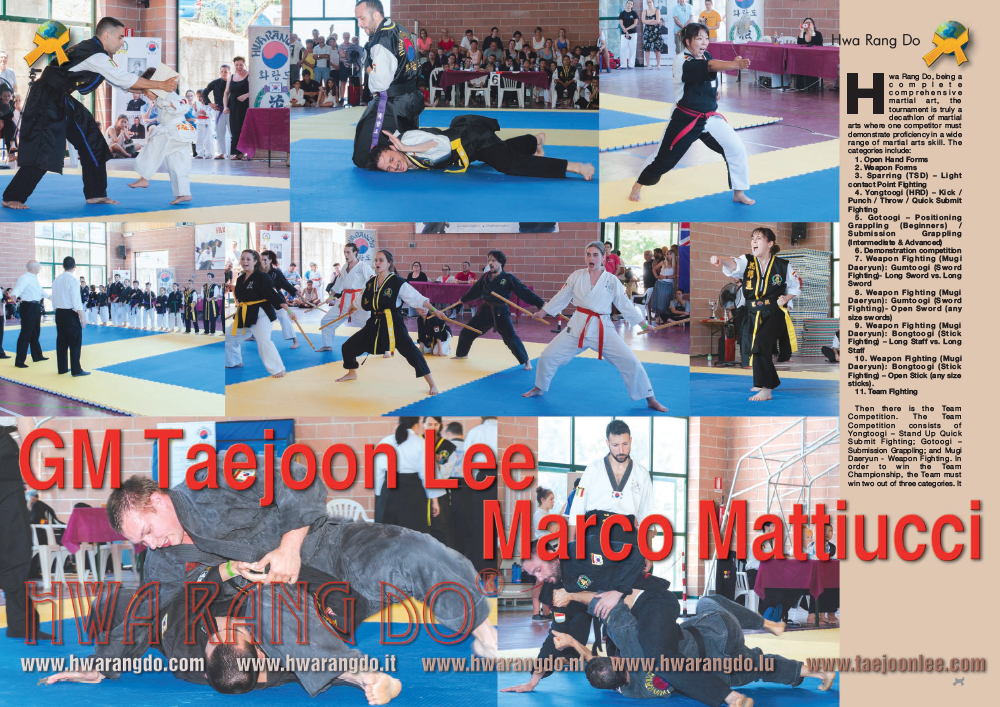 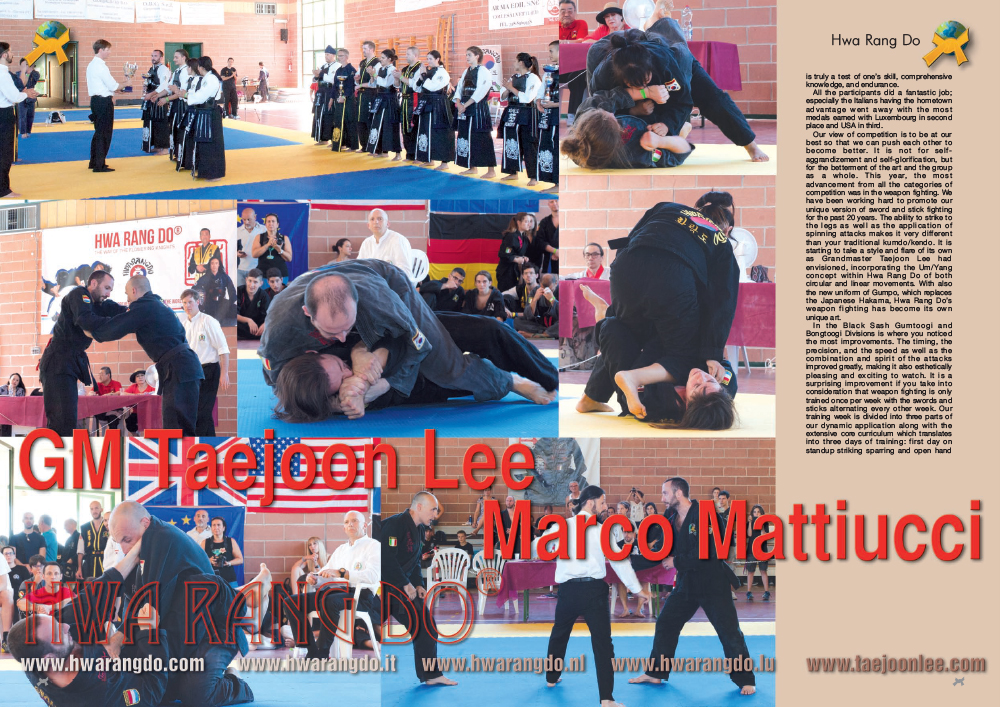 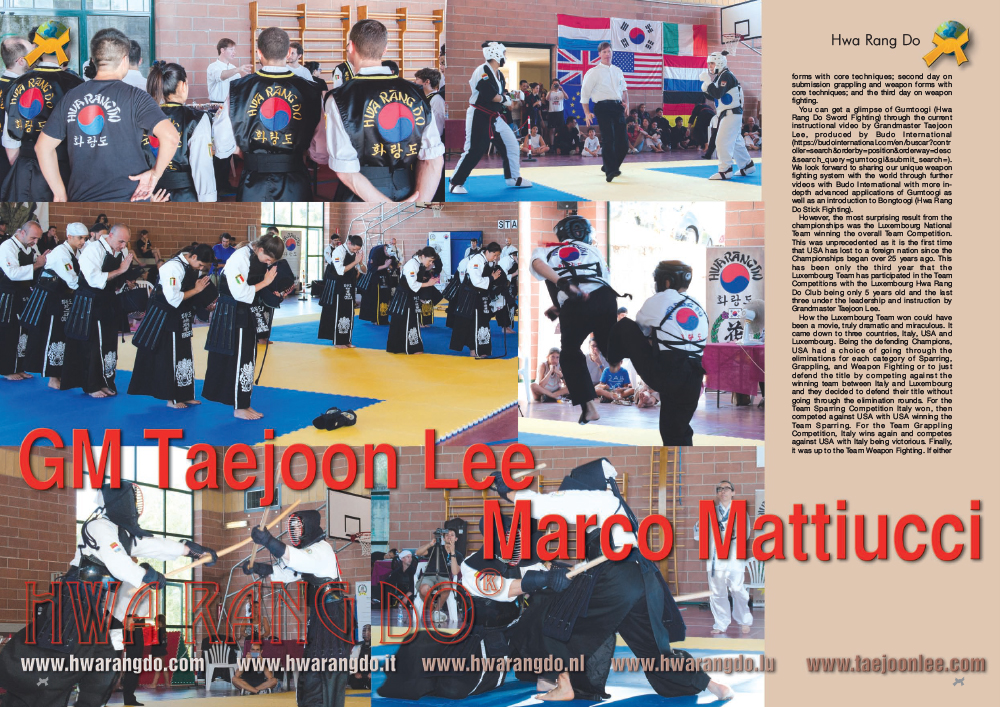 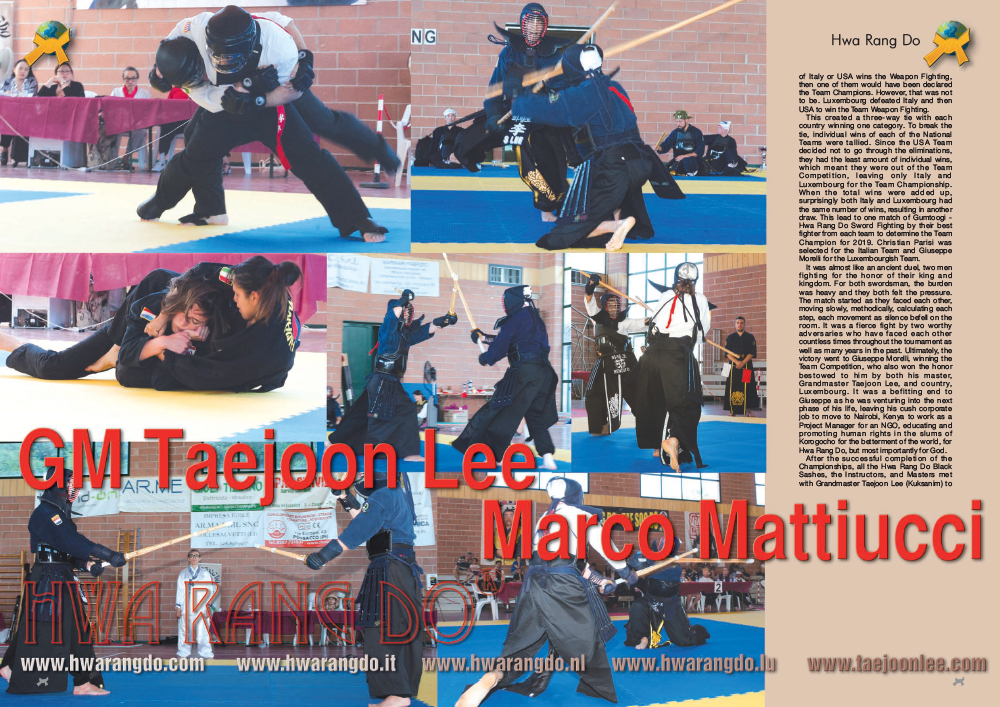 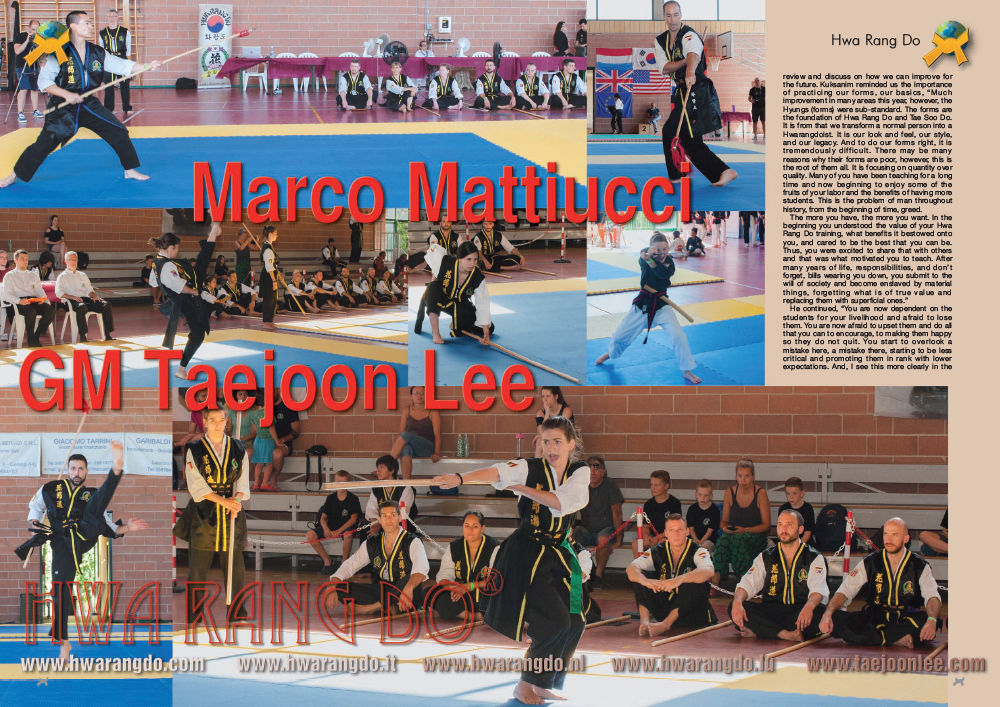 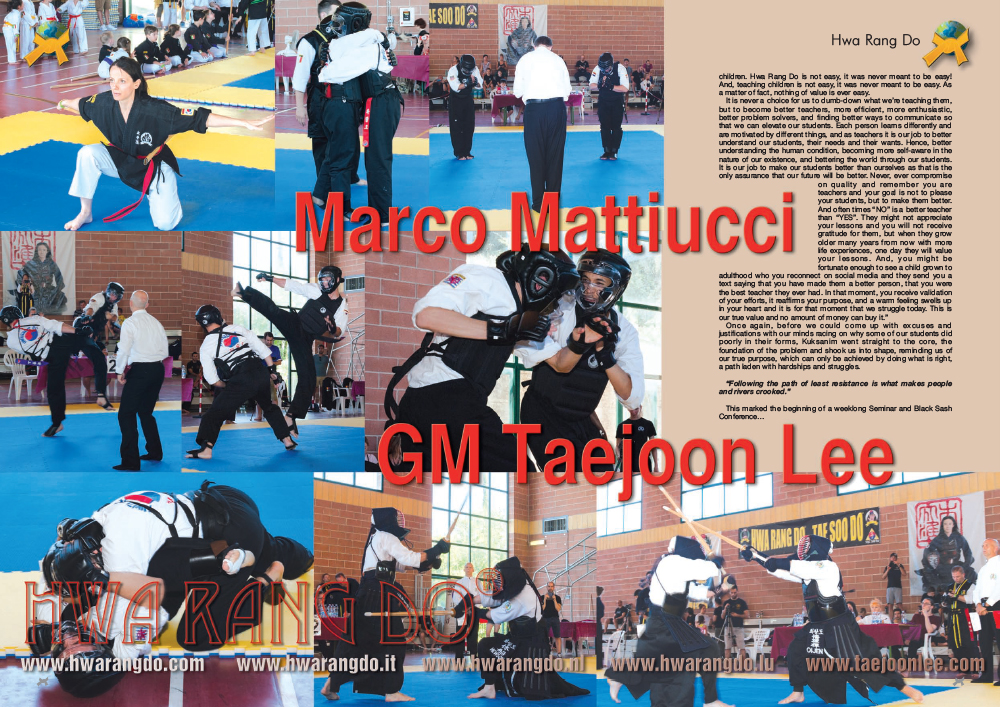